This page will show you how to create API models when your service lives in a Docker container, or is started by Docker Compose, or runs in an environment like Amazon's Elastic Container Service. Docker networking can be difficult to get working correctly; we will show a few different options that allow Akita to see your API traffic. By default, one container cannot see traffic destined for another container, so special configuration is needed in Docker.

The following examples use akita learn to create both a trace and an API model. If you only want to create a trace, you can use the akita apidump command instead.

We do not yet have official Windows support for the Akita CLI. While our users have gotten Akita to work as a container within the Windows Subsystem for Linux (WSL), it does not currently work to trace Windows APIs from a Docker container in WSL.

Attach the Akita CLI to a running container

This method is the most straightforward way of capturing a single container's network traffic. However, because it involves a separate "docker run" step, it cannot be used as part of a Docker Compose script. It will also not work if your container is connected only to an internal network.

Start your service first; this can be done through docker run or docker-compose as usual. Find the name of the container you want to monitor. Then, start the Akita CLI and specify that it should attach to that container's network stack:

This will cause the Akita CLI to be able to see all the traffic to and from the service running in the specified container. You should switch "port 80" to be the port number that your service is using (inside the container), or the filter can be omitted to capture outgoing traffic from your service as well. 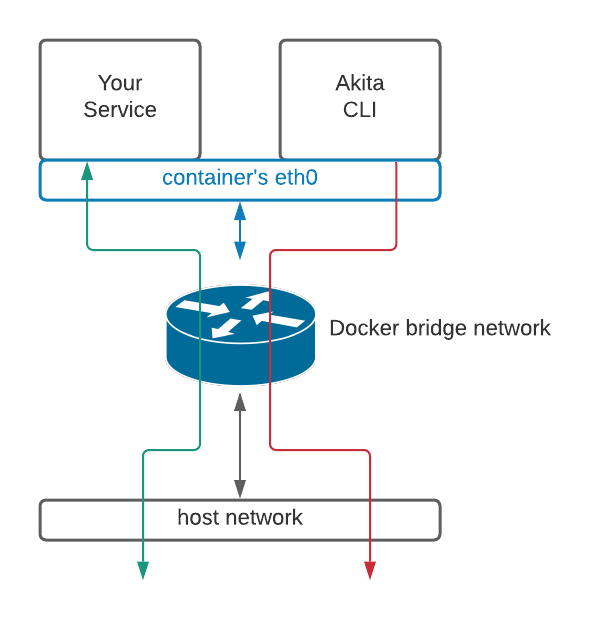 As shown in the diagram above, Akita will use the same network device as the service being monitored. It will not have visibility into other containers.

Attaching to a container in Docker Compose

akita learn creates a model when the trace is stopped with SIGINT. If you use docker-compose kill then the Akita container will not be shut down gracefully, and no model will be generated. You can still create a spec from the trace with the apispec command.

Either docker-compose kill -s SIGINT or docker-compose down will shut down the container gracefully, giving it time to stop the trace and request that the spec be created.

Attach the Akita CLI to the host network

If you wish to monitor multiple containers simultaneously, or if the container you want to monitor is connected only to an internal network, you can attach the Akita CLI to the host network. This works with either docker run or docker-compose. Here's an example command line for the former:

You should still use the port number from "inside" your service's container; Akita's packet capture sees the untranslated port instead of the externally-visible port number. In this mode, Akita can capture any container's external network traffic, and even traffic on internal networks. 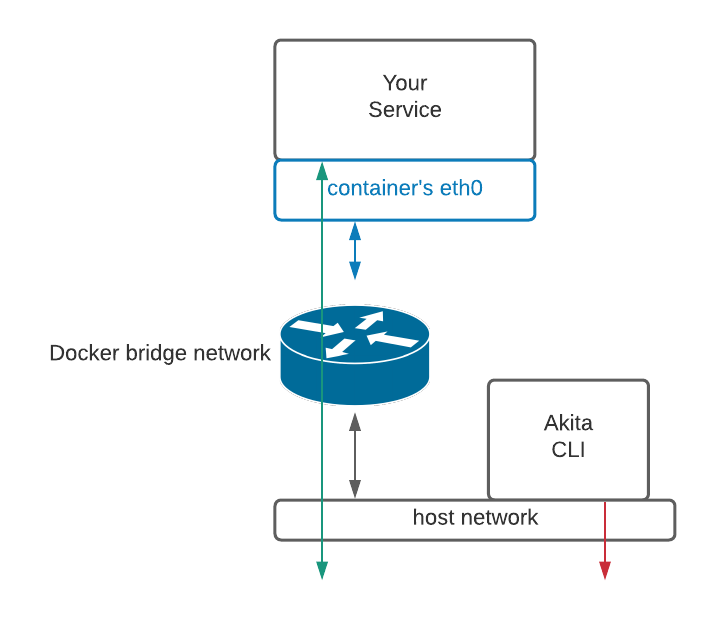 Host mode is only available for Linux-based Docker.

To use host networking the Akita CLI in Docker Compose, specify network_mode: "host" in the YAML definition, as in this example:

Use the Akita CLI as a wrapper for your server process

To capture traces this way:

This command will create a model when the server process exits.

The learn command captures a single trace for as long as the Akita docker container is allowed to run. When the container is stopped, the learn command attempts to create an API model from that trace. However, this is not a good fit for continuous monitoring, as no model will be created until the process exits. This section shows two alternatives for getting periodic models.

You can use the -c option to akita learn to run a subcommand. The learn session will last as long as this command runs (as described in the section above on using the CLI as a wrapper.) You can use this functionality to generate periodic traces by running the sleep command.

This command will capture a trace for one hour, then exit. You can run the command in a loop, or have the environment automatically restart the container, to capture traces on a continuous basis. A model will be generated for each one hour of trace, if you use the learn command. To create traces only (and create models by hand), use akita apidump instead.

The Akita cloud can automatically create models from traces that are identified as coming from a production, staging, or test environment. To use this feature, you need to mark the trace with the reserved x-akita-deployment tag. The easiest way to do this is to set the AKITA_DEPLOYMENT environment variable to a meaningful name for the context in which the trace was collected; we recommend a name such as "staging", or "production".

All traces from the same time period that have the same value of the x-akita-deployment tag will be combined into a single model.

If you use this feature, it is best to switch from akita learn to akita apidump so that you do not get multiple models from the same trace.

Running the Akita Daemon on an internal network

When running the Akita CLI in daemon mode (see Staging and Production Express.js via Middleware), it is necessary that the middleware have access to the Akita daemon, and that the Akita daemon is able to access the Akita cloud services. You can use Docker-compose to ensure that the service being monitored and the Akita CLI are connected to the same network.

If the service's network is internal, then the Akita CLI must be connected to an additional external networks. Here is an example Docker Compose file that shows how this can be done:

In the Express.js middleware configuration, the daemon host would be set to akita_daemon:50080. Docker's DNS setup ensures that the correct IP address is used. 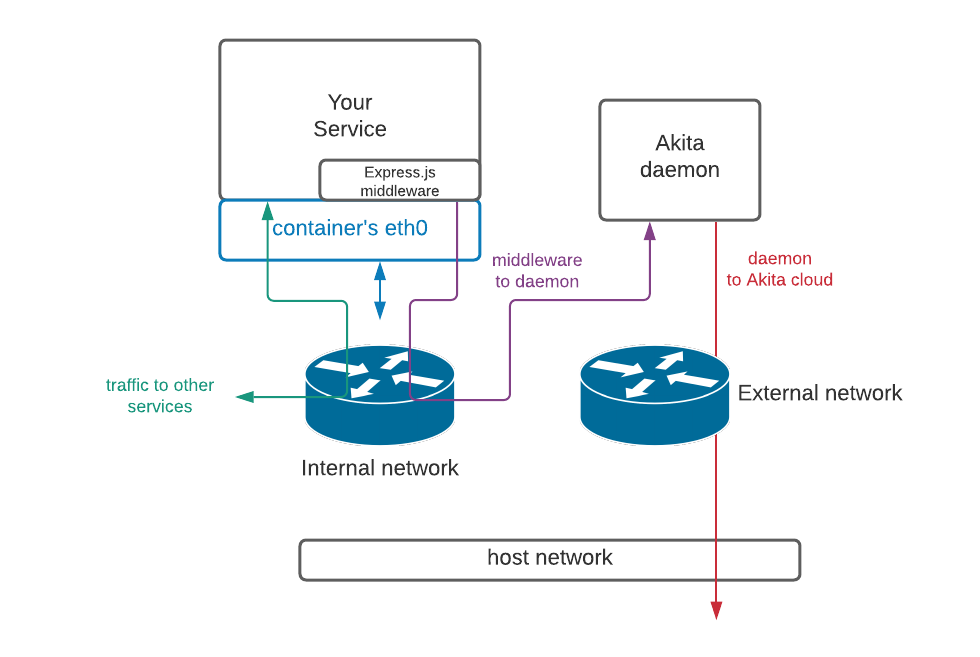 Providing the Akita credentials in a volume

Many of the examples above specify the Akita credentials for the container as environment variables. Because the environment variables are set up on the command line, they may be exposed. A better approach is to mount the file containing your Akita credentials into the container. You can do this by using the following flag on the Docker command line:

This maps your current user's credentials.yaml file, created with "akita login", into the container.

You can also use docker's --env-file argument to specify environment variables in a file instead of on the command line.

Updated about a month ago